Fight For People Who Can't Fight For Themselves 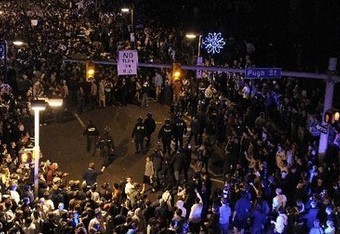 Penn State students (I will not call them protestors because they were just acting as students and not reasonably thinking adults) embarrassed themselves Thursday night by turning over cars and causing property damage in response to Penn State head coach Joe Paterno's firing.  Subsequent Facebook posts by current and former Penn State students have me so alarmed that I felt the need to blog about it.  I try to not let anything political dawn this website, but I can not sit idly by while sexual abuse of a ten-year-old child is not taken as seriously as it should.  As an avid sports fan, I understand that objectivity is difficult when it involves ones own team, but even I can separate the humanity of this issue vs. my loyalty to an institution.  For anyone that still is not disgusted that Penn State did not do more as an institution to prevent the clusterfuck that is the current investigation on sex abuse ON THE PENN STATE CAMPUS (I'll explain later why that is capitalized), these are the reasons why Penn State and everyone involved deserves any and all punishment they get:

This will be a permanent blight on Penn State (as it should) and the lack of action will hopefully spur a movement to prevent this from happening to another child.  Now that the national media and investigative journalists are in State College, the truth will come out, and not just what a small town wants us to hear, and I want everyone involved to be punished to the fullest extent of the law.  If you do not agree, I feel sorry for you and hope that you receive help.
Posted by Unknown at 9:13 AM