Not even June 1st and I'm already moving into Fantasy Football season.  It's never too early to get a leg up on your opponents in what is the best fantasy sport around.  Sure, there's baseball, but that's for marathon runners.  I'm more of a sprinter.  I'll take football and its 16 weeks of agonizing ecstasy.  It also helps that the games themselves are actually watchable, unlike in baseball.

Thursday night I participated in Rotowire's #MockDraftArmy draft hosted by Mock Draft Central.  It was a 10-team, 2-QB draft that had some interesting results.  Here is my team.  How did I do? 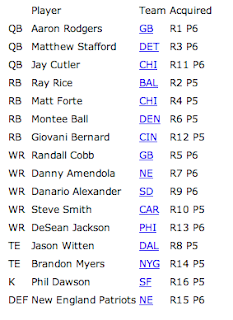